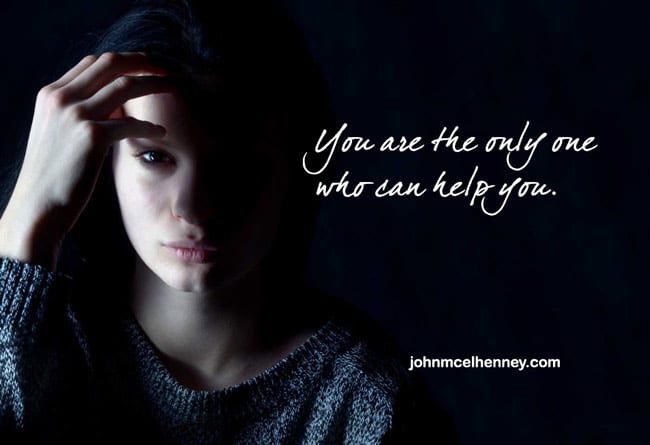 Six months ago I was a basket case. I have gone through bouts of depression since my late teens when I learned more about my mental illness. Today, I’m less worried about going public with my issue, or series of issues, as they present themselves. Today, it is even more critical for me to speak out against depression, against suffering alone, and towards hope and wholeness that can come from getting help.

I spoke to a high school friend today who was “not doing well at all.” He said he was in one of the darkest places he could remember and was facing wave after wave of debilitating anxiety. He had good days and he had bad days. Today, the day I called (out of the blue) was a bad day.

I listened patiently to his complaints and issues. I empathized with his pain, and shared a few of my own recent dark experiences, to give us some common ground. Then I asked him the most important question you can ask anyone dealing with depression.

“What are you doing for yourself?”

That’s when his argumentative side came out. He told me about last year and going to the emergency room three nights in a row. “That’s how bad it got,” he pleaded.

I waited. I listened some more. Then I persisted.

“What happened last year sounds really hard. I can’t imagine the fear and pain you were in,” I said. “But I want to know what you are going to do from here, from now. What are you going to do next to help yourself?”

We wrestled some more with stories, drug prescriptions gone bad, more events that sounded terrible. I listened. He needed to talk some of this out. He needed to be heard. He was feeling bad, depressed, anxious, and wanted to know why I called again.

Then I asked him if he wanted my advice? (In recovery we learn early on that advice is not given unless asked for. And often, this is because it’s bad advice, and the giver has no real understanding of the situation.)

With a bit more talking around the depression and the current hard times, he said, “Okay, I’m ready to listen.”

“I knew that I was prone to isolation when I got depressed so I needed a strategy against that. I started going to Al-Anon meetings at least once a day. I kept my exercise program going and walked every day, no matter how I was feeling. And after a couple of months, I took a job at a gourmet grocery store as a cashier making $12.50 an hour. I did everything I could think of to keep myself from remaining in isolation.

“Isolation is death. Isolation is a dead end. Humans are not meant to live in isolation. But depression makes you believe that being alone is better than being with others. Depression asks you to climb into bed in the middle of the day and not take phone calls or texts from anyone. Depression fakes you into thinking the cocoon you are creating with the covers over your head is a safe one. Depression lies. It is a dangerous one, this isolation behavior we seem to crave.

“Do everything you can to break your own isolation.”

And guess what? Two magical things happen when you show up.

When you go to a meeting you immediately break isolation. Over time, as you continue going to meetings you might make friends. You might ask for and get a sponsor to talk you through the 12-steps. But what you will definitely get, 100%, is community. The loss of isolation. It’s hard. You have to keep coming back, keep getting up, keep stretching to feel better. But that’s the only part of the process you can control, your actions.

So here’s the tough medicine our depressed friends need to hear.

Easy for me today, here from my happy place, looking back. But I could taste the fear in my friend’s voice. I was angry at his depression. I was also a bit harsh with him about his responsibility. There is no one here to save you. There is no one who is going to show up and make things better. It’s you, that has to show up. It’s you that has to take action. Now. Today. Everyday.

Look online for AA meetings and Al-Anon meetings in your area. Chances are there is one starting in a few minutes from now. I know, today, that I have a noon or a 9 pm meeting I can go to every single day of the week. I have a sponsor who has become a friend and mentor. And I have hundreds of people at those meetings, ready to greet me warmly and with compassion.

All that has happened to you is the past. What matters is what you do right now.

Get to a meeting.

Experience, Strength, and Hope After a Divorce with Kids

Often Your Limitations Are Self-Imposed

I Will Return Tomorrow: Strategies for Surviving and Thriving with Depression

This site uses Akismet to reduce spam. Learn how your comment data is processed.